You are here: Home › PVC Pipes › The Cost of Corrosion

The statistical information in the graphic below is taken from the study Reforming Our Nation’s Approach to the Infrastructure Crisis: How Competition, Oversight, and Innovation Can Lower Water and Sewer Rates in the U.S issued by the National Taxpayers Union in April of 2013.
(Download your own copy by following the link above).

Corrosion is the chemical or electrochemical reaction between a material, usually a metal, and its environment that produces a deterioration of the material and its properties. In the United States, cast iron and ductile iron pipe make up the majority of our nation’s aging water infrastructure. These materials are the most vulnerable to deterioration caused by corrosion. Corroded iron pipe brings about leaks, breaks, and pipe failure, resulting in 850 water main breaks a day in the United States. It is recorded that 6 billion gallons of water, the equivalent of California’s daily water usage, is lost every day. Along with the loss of natural resources, local municipalities are also exhausting funds to repair the problem. The cost to repair corroded water lines throughout the country is $3 billion in water main repairs alone and $50.7 billion in total cost. Corrosion is degrading our drinking water and wastewater systems and costing our nation billions of dollars.

Many factors contribute to corrosion-induced water main breaks, including soil conditions, coupling to dissimilar metals, seasonal temperature changes, soil stress, road de-icing salts, and seismic action and stray electrical currents. There are three types of corrosion that occurs in iron water mains: galvanic, tuberculation, and pitting. Each type of corrosion can occur individually or can be a consequence of another. Each can have hazardous effects on the quality of water that we need to survive. Galvanic corrosion is caused by the existence of a galvanic cell – essentially two metals submersed in an electrolyte – that results in an attack on one metal at the expense the other. For a galvanic cell to form, two electrochemically different metals must exist within a localized electrolytic environment. Tuberculation is the development or formation of small mounds of corrosion products and bio-film contamination on the inside of iron pipe. These tubercules roughen the inside of the pipe, increasing its resistance to water flow. It can be a breeding ground for bacteria. Pitting corrosion is a localized form of corrosion by which cavities or “holes” are produced in the material. Pitting is considered to be more dangerous than uniform corrosion damage because it is more difficult to detect, predict and design against.

Corrosion costs U.S. drinking water and wastewater systems $50.7 billion annually, according to a 2002 congressional study. A report entitled, Corrosion, not Age, is to Blame for Most Water Main Breaks, confirms that corrosion is the leading cause of water main breaks in North America. The burden of corrosion-prone pipe materials is not limited to the cost of repairing and replacing failed pipes. It includes the cost of treated water leaking from the system. The American Society of Civil Engineers estimates that 2.6 trillion gallons of potable water are lost every year through leaking pipes, or 17% of all water pumped in the U.S. Countless studies confirm the extent of the corrosion scourge, and entire industries and organizations like the National Association of Corrosion Engineers have spawned in an attempt to address it. PVC does not corrode and has among the lowest pipe breaks, saving our Earth’s precious water resources. While certain pipe manufacturers continue to explore “solutions” to corrosion – because their materials are affected by it – PVC remains indisputably resistant to it.

Plastic PVC pipe can stop the corrosion problem before it happens because it is immune to corrosion. Plastic pipe exceeds iron pipe in durability, longevity and performance. Independent studies by the American Water Works Association Research Foundation and the Plastics Pipe Institute show PVC and PE, respectively, last longer than 110 years.

To learn more about the benefits of plastic pipe look at the following information: 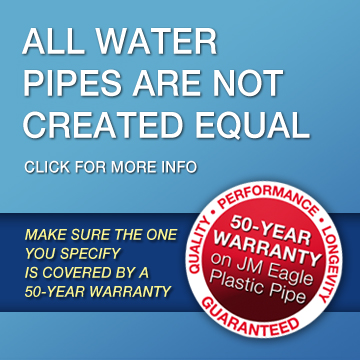 Reforming Our Nation’s Approach to the infrastructure crisis

How Competition, Oversight, and Innovation Can Lower Water and Sewer Rates in the U.S.

America’s population is expected to grow by 100 million by the middle of the 21st century. This growth will put enormous strains on the nation’s infrastructure, including roads, bridges, tunnels, and air-traffic control systems.